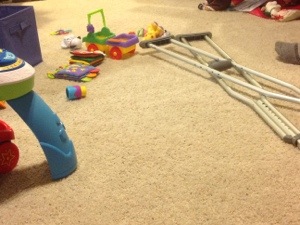 In September I wrote that “It’s not life if there are not challenges.” This week I need to take my own advice. It has been a whirlwind last few days, with more challenges flung our way.

My last physical therapy appointment was Thursday (more to come about that in another entry). We also had the final visit for the Little Guy’s IFSP (Individualized Family Service Plan) related to his failure to thrive diagnosis. (More about that to come later, too.)

Then, on Friday, my husband and I were back at KU Med orthopedics. For him this time.

He’s had right foot trouble for months that he had assumed was related to an old injury. It was really bad for the first two months after our move — and my pelvic reconstruction surgery — and he recently had noticed improvement. This was the third doctor he had seen about this problem and he was there Friday seeking a second opinion after being told he would benefit from a tendon repair surgery.

On Friday, the doctor discovered on x-ray what he believed was a stress fracture. He said we could do one of two things – confirm that likelihood with an MRI or bone scan or treat him for stress fracture and return in six weeks to see if there is improvement in his pain and on x-ray. We opted to treat it. That means six weeks of no weight-bearing on his right foot (crutches), with a walking boot for stabilization. And it’s a bonus kick in the head that he got this lovely boot four days before Christmas and our packed “Midwestern tour” to visit family.

It’s not ideal, but six weeks is early February. If this works, we’ll be hiking as soon as the snow melts and the ground is ready and camping at the first opportunity — both healthy and ready for adventure. Our fingers are crossed.

There are things about this newest challenge that already have shocked me.

At one point during the first day my husband was grousing about his boot and crutches and frustrated about how he couldn’t do something, and couldn’t he just take the boot off until after Christmas. I immediately said:

“Do you think it was easy to be in a wheelchair for nine weeks? Buck up! You’ll be fine. You are going to wear the boot and you are going to get better.”
He said: “At least you knew it was coming. I walked in there this morning and thought I was fine.”

We were both right.
He will be fine. This six weeks will fly by in the scheme of things and if it keeps him from needing surgery it will have been well worth it.

It is a shock to have your regular life up-ended in anyway, at anytime. But when you imagine life going a certain way (for example, celebrating the holidays with 40 of your relatives with two working feet and no mobility restrictions) then a sudden change can feel even worse.

But there is something else.

My husband has to get used to having this restriction. He needs time to get from the “woe is me” mindset to the “yes I can” mindset and I need to remember that everyone will have his or her own timetable for that. While I logically knew that I would wake up from surgery Aug. 24 and not be able to use my legs, nothing could have prepared me in advance for what it actually was like to live in the chair for just over nine weeks.

It’s hard for me not to compare things in my mind. When he’s grousing I think “did I do that? What did I sound like to him?” I say grousing because my husband is almost never 100 percent serious about anything so when he’s complaining those of us who know him know to remember who’s talking.

But I’ll be honest. On Friday and Saturday, I thought he was kind of a baby. Every time he whimpered for me to do something for him I thought about how much I hated to ask for a glass of water, or any help to do the stuff that should have been simple. I thought to myself “I didn’t do that. I wanted to do things for myself and I couldn’t.” When he showed me his arms and asked if there was bruising from the crutches, I thought to myself “at least no one cut you open and moved your muscles around with clamps.” (There was no bruising.) And when he opted to sleep on the couch I wondered: “Did he miss me like this when I slept on the couch”

For the first two days he didn’t want to do things he typically would have, didn’t want to push himself beyond the bare necessity. When I started in the chair, he encouraged me to get beyond what was comfortable everyday. Every. Single. Day. Even when all I wanted to do was not move a muscle.

I have tried to respect his comfort level. He said his arms were really sore from the pressure of the crutches. Anyone who says “put the weight in your hands” has never actually used these things, apparently. He’s a lot more comfortable today (Day 3) and was a lot more geared up to get things done. He just finished making an appetizer to share with the family tomorrow evening. And I am SO proud of him for that. He’s getting around well, fighting through the annoyance really well. And, I think, starting to focus on what will come after this bump in the road.

I’ll keep trying to be patient and he’ll keep getting used to his new method of getting around. And hopefully soon, we’ll both be back to 100 percent.