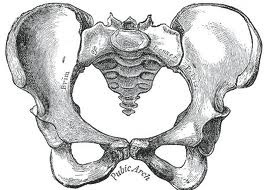 A very dear friend of mine is not yet a mother but reads a lot about baby care, childrearing and at least partially because of my experience she reads about the pelvis and its role in pregnancy and childbirth. On Christmas Eve she opened a very thoughtful and lengthy email with a link to the column “Pelvises I Have Known and Loved.” She discovered it on a blog she follows. She said: “It’s fascinating, and I’m interested to hear what you think. The shoe size/pelvis size thing cracked me up. …”

I haven’t really given her my honest take on this. So, after almost three weeks of kicking it around in my head, here goes.

This piece was originally published in 1999 (Issue 50). It’s written by midwife Gloria Lemay, who practiced in Canada for years before this was published in the journal Midwifery Today. Given the headline, I was curious, too.

This is how the piece opens:

What if there were no pelvis? What if it were as insignificant to how a child is born as how big the nose is on the mother’s face? After twenty years of watching birth, this is what I have come to.

Gee, thanks. What Ms. Lemay had “come to” took one sentence to render everything that happened to my body, and its impact on my family, completely insignificant. (Or did it? I’ll come back to this.)

She goes on to talk about how the pelvises of women having babies today — at least until hospital intervention became more common and the c-section rate began to balloon about 45 years ago now — are the product of evolution. Their pelvises got here because women with pelvises insufficient for childbirth were weeded out.

I guess I should feel lucky to be alive right now. That feels awfully dramatic, but maybe it’s true. Why did I never think before about whether there was a history of childbirth related pelvic issues in my family. Oh, wait, because someone would have mentioned it by now. Right?

She goes on to discuss doctors having to give women and their husbands reasons for the “emergency” c-section she just had – and an insufficient pelvis, she says, is a big one. She talks a bit about electronic fetal monitoring and its use – and then declining use because of the legal system. While it felt like a tangent, I understood why it was there. Let’s get back to the pelvises.

She does, with a flashback to her early midwifery days. She talks about workshops on how to measure a woman’s pelvis to determine if she will be capable of delivering naturally. She makes the point that if these measurements are done too early the hormone relaxin won’t be accounted for.

One of the midwife “tricks” that we were taught was to ask the mother’s shoe size. If the mother wore size five or more shoes, the theory went that her pelvis would be ample. Well, 98 percent of women take over size five shoes so this was a good theory that gave me confidence in women’s bodies for a number of years.

Really? The column says Lemay works in Canada. I had in my head that the journal was published in the UK (It’s not). It isn’t mentioned in the article what shoe size scale she’s talking about. So the first thing I did was look up what my 6.5 American shoe converts to. Canada uses the same scale as we do in the US. But in the UK my 6.5 is a 4.

Then I had a client who came to me at eight months pregnant seeking a home waterbirth. She had, up till that time, been under the care of a hospital nurse-midwifery practise. She was Greek and loved doing gymnastics. Her eighteen-year-old body glowed with good health, and I felt lucky to have her in my practise until I asked the shoe size question. She took size two shoes. She had to buy her shoes in Chinatown to get them small enough—oh dear. I thought briefly of refreshing my rusting pelvimetry skills, but then I reconsidered. I would not lay this small pelvis trip on her. I would be vigilant at her birth and act if the birth seemed obstructed in an unusual way, but I would not make it a self-fulfilling prophecy. She gave birth to a seven-pound girl and only pushed about twelve times. She gave birth in a water tub sitting on the lap of her young lover and the scene reminded me of “Blue Lagoon” with Brooke Shields—it was so sexy. So that pelvis ended the shoe size theory forever.

So that ended the shoe size theory forever. FOREVER? I’m glad she didn’t unnecessarily stress this woman. But we’re talking about a gymnast here. A gymnast, who’s body bends and moves in ways average women’s bodies like mine don’t. Is it really logical to ignore that?

Our birth experience wasn’t sexy. It took hours and there were too many pushes to count. For a time, our son was stuck, as far as I was told. He came out with the back of one hand on the opposite cheek. The best guess of the midwives was his elbow was stuck for awhile. He was born at 7 lbs. 10.5 oz. about an hour after I felt the tear in my pelvis.

Ms. Lemay shares two more examples. A woman who had a c-section for her first baby and at the time the surgeon said she wouldn’t be able to delivery vaginally unless the baby was under two pounds. Her second child, 7 lbs., was indeed delivered vaginally. And the “pygmy women of Africa,” who she says are typically about 4 feet tall and delivery babies of 8 lbs on average.

She closes with this:

That’s the bottom line on pelvises—they don’t exist in real midwifery. Any baby can slide through any pelvis with a powerful uterus pistoning down on him/her.

That brings me back to the beginning.

Does this mean she would say my pelvis did its job? What would she say to me? I can’t imagine a scenario in which she neither blames me for what happened to my body nor changes her stance on pelvises. Did she ever have a patient who experienced pelvic girdle pain? Did any of her patients have diastasis and she not know it, or recommend treatment, as was the case for me?

The thoughts and questions rushed when I finished reading. It was the first hours of Christmas morning. I had waited to read this after the business of Christmas Eve. When I started reading my mind was alert, but I wasn’t expecting to be awake much longer. By the time I finally fell asleep I had gone from feelings of raw righteous indignation to a much more mellow view. It took me hours to calm down. What I finally told myself was:

We agree on some very important points: Unnecessary interventions in the birth process are not wise. Midwifery is important in our society. Families should be able to choose how they want to bring new life into the world, whether at home, at a birth center or in the hospital. We only disagree on one thing: the importance of the pelvis in childbirth.

And maybe she’s right in 98, even 99 percent of cases. But in cases like mine, and Jen, and the other women I know are out there suffering with diastasis symphysis pubis, that outlier matters. That outlier is us.

A cost-benefit analysis approach to someone’s body doesn’t work when the whole principle of midwifery is intended to value and respect the woman, her body and her power. Just like car companies shouldn’t be able to decide it’s cheaper to pay a lawsuit judgement than to solve a problem, a midwife should not disregard the role of the pelvis because most of the time its role is insignificant.

If someone had said to me durning my prenatal visits “Your feet are very small. I think we might need to watch out for your pelvis” or something to that end, it wouldn’t have made us head for the door. But it would have given us information that would have allowed us to ask questions and consider other options when we realized our son was stuck. We can’t change it now, and I honestly don’t know that we would have decided to be transferred to the hospital. But I know one thing, if my nieces end up with feet like mine instead of their mother’s (my sister wears a U.S. 10) it may be something I mention to them.

*Note: When this post was originally published, I had confused Midwifery Today with a British journal I had encountered during other research. Midwifery Today is based in Eugene, Ore., USA.