When I was in college I could get from one end of campus to the other in much less than the 15 allotted minutes between classes. I’ve always been someone who walks with purpose. Even early in my eighth month of pregnancy I walked faster than my husband.

This week we’ve both been hobbling along. He broke his right ankle badly in high school and it has been flaring up lately. But he had a plan: new shoes with more arch support. He wears the same sneakers at least six days a week and they are now a year old. He’s probably right about needing more support. So, we stopped at an Omaha sporting goods store before visiting his Grandpa at the hospital. Hopefully he’s right about the shoes and he will be able to make it through the move — and everyday life — without too much pain. 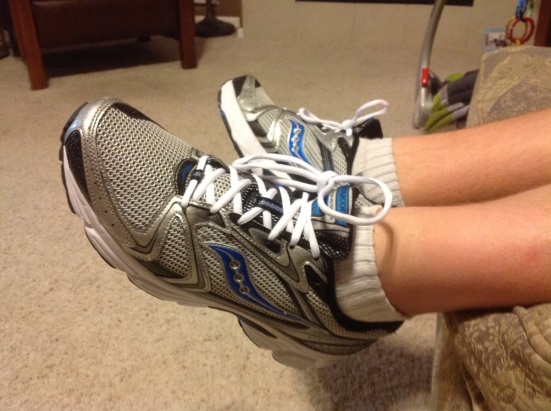 He’s tough so I know his foot and leg were really bothering him if he said anything. I don’t think I was trying to compare things in my mind, but I couldn’t help but think of those first few weeks and the pain I felt with every step.

I started using the walker when my son was six days old. My mom arrived that day from her home in North Dakota and she brought it with her. Each day prior, if I needed to get somewhere in our apartment I had to lean against something.

I developed a system to get from a sitting position on our bed to the toilet, for example, that required 10 of the smallest steps you’ve ever seen and specific set of hand placements.

My husband HATED that I would lean on that towel bar. He was afraid it would detach from the wall and make me fall. But I couldn’t figure out another way. I used that exact system for more than three weeks (the walker wouldn’t fit through the bathroom door).

In those early days I couldn’t scoot across the couch, push myself back to sit up in bed or any number of things that made my pelvis vulnerable. Until then I really had no concept of how much work the pelvis does. Talk about not appreciating what you have until it is gone.

I could stand still, but turning in the shower took what felt like several minutes, a series of tiny steps and leaning against the wall. For the first two months it was impossible to shave my legs because I couldn’t stand on one leg for the few seconds it took to balance the other one on the edge of the tub. Even now I have adjusted my position so my knees are incredibly close together. Most of the time, once I get them into position I can hold it long enough to get the job done. But some days I’m just not up for it. Every day it still hurts to scrub my pubic bone. I’ve tried arnica cream on it, but it doesn’t help much. (I shaved it once to make sure the cream was touching the skin directly and I winced the entire time. I’ll have to shave it again the night before surgery, too, in order to help prevent infection. SWELL!) When it aches the most it even hurts to wipe myself. HOW RIDICULOUS IS THAT!

From those five pregnancy books I was prepared for a few weeks of hemorrhoids, even stitches. And I’d heard stories of mom’s who even years after birth pee a little when they sneeze or cough because of weak pelvic floor muscles. These are just accepted things, according to the books. Apparently they happen to just about everyone. I am happy to report that today I don’t pee when I sneeze — although I did for about the first three and a half months. A Kegel exercise doesn’t hurt and I try to do them each time I pump milk. I don’t have hemorrhoids and I received three stitches that were healed in about two weeks, but I did not need an episiotomy (We did a lot of perineal massage in advance of delivery and it apparently paid off). But there are days when I dread going to the bathroom because of what happens to your hips and pelvis when you open your legs to wipe. No book could have prepared me for that.

Right now, my mother-in-law is rocking the little guy to sleep, my husband just left for a run (in spite of the sore foot) in his new shoes and I just told the world some really personal stuff. But if you’re out there suffering like this, please know you’re not alone. This pain is real and you deserve answers.

If you haven’t had an x-ray, ask for one. I wish I had pushed for one more sooner. My first x-ray was straight from above. It’s the one that showed a pelvic separation of 13 mm and lead to a formal diagnosis: Diastasis Symphysis Pubis. The surgeon ordered new x-rays because they can learn more from a series of three – from above, looking in (angled toward the pelvis from your head) and looking out (angled toward the pelvis from your feet). It was that x-ray that showed my doctors – and me – that what I was dealing with was serious. It’s what lead to a treatment plan that was more than “brace and wait.”

Listening to my body and modifying the way I did things only got me so far. But the potential to get better is out there and in seven more nights I will begin to live that potential. I will get better.