It’s hard for me to believe in some ways that it was one year ago today my pelvis was surgically stabilized. After everything that’s happened since I learned I had a separated pelvis 19 months ago, sometimes it feels like a decade has passed. 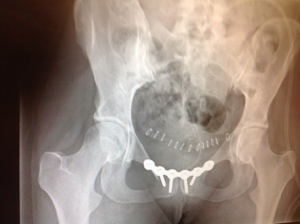 Mentally, breaking things up into phases — as I often referred to them here — helped me get through everything. It also makes me feel like each of those was a separate block of time that took up a lot more time than it actually did.

Some of the proudest moments of my 32 years happened during the first year since my surgery. Traveling to Washington, D.C. by myself while I was in the wheelchair is my proudest accomplishment. Far and away the most “bad ass” thing I’ve ever done. And the coolest part — I never really thought I couldn’t do it. I wasn’t scared. Nervous, sure. But confident in my own ability.

Walking into my son’s school with the walker on Halloween was a huge thrill for me. It was my first time through those doors in nine weeks and only the second day I could use the walker outside of the house. Another moment worth celebrating was my first attempt at running (just this week). Every time I practice yoga I am infused with that same feeling of strength and awareness of my own ability.

Some of my weakest moments came during the same time. I battled panic attacks, cried at the sight of pregnant women and fought the urge to run up to them and make sure they were not hurting. I struggled through insomnia and nightmares related to my experience. I learned that you don’t have to go to war, be kidnapped or physically attacked to develop and suffer from PTSD. I yelled too much at my husband because I hurt and I didn’t want to. I said some things I still wish I could take back. But none of those things define the last year — or me.

This was a year of finding strength and experiencing love and kindness. Friends sent letters, cards and gifts. Some drove over night to visit and lift my spirits. One sent awesome notes — and a ribbon that still hangs from the bathroom mirror — in the mail to remind me that we’re a normal family that is going to make it. Thank you to all of you who reached out. You really made a difference for me and for my guys.

Hopefully the next trip around the sun will require fewer pain meds, less Biofreeze and fewer nights with the heating pad. Hopefully there will be fewer nightmares and more ability to trust. Hopefully I’ll be able to spend more time advocating for quick action care for moms who experience DSP, raising awareness and building a support network for those moms and their families.

4 thoughts on “One trip around the sun”